Technology has made headway into each one of our lives. With the onset of the technological revolution, gadgets have become a common sight. The one thing that has grown by leaps and bounds is the mobile industry. Also after the ushering in of 3G era, the usage of mobile phones increased from merely calling and messaging to using internet on it too. As internet becomes increasingly accessible on mobile phones, there is an ever increasing need to create websites and pages that are suited for handheld devices like phones and tablets.

It is important to realise that not all web-sites need to have a mobile version. There are certain portals that have the extensive need to be launched or re-launched with a mobile version. Thus, if your normal web site is one that takes a lot of time to load owing to various heavy design features, you could work well with a simpler no-frill edition that is easier to load on a phone too. Also, if your web-site is something that is to be used mostly for a mobile user, like e-recharge or a virtual networking site, it becomes important to have a different version for the handheld devices. 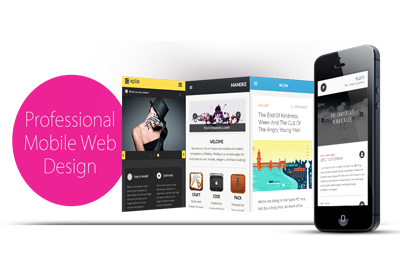 If you plan to get a mobile website, it is important to do away with un-necessary bling which might take a lot of packet data to open. The features should be simple and light making it easy to load on a mobile device. Smaller size images, compact designing and a cleaner layout help make the web site more responsive on the mobile. There are various links or features that could be done away with. Preferably the ones that are heavier to load and do not add anything fruitful to the website.

Talking about the Importance

In order to create a successful mobile website, it becomes imperative to lose out on a lot. But certain key features have to be retained. Those things that make the website standout from the others must be retained. Also those that help inform the general web audience about the purpose of the site have to be highlighted and given greater preference over the others.

Get Benefited from the Right Cadence of Talent, Effort and Expertise

For designing the dream website for your dream business, it is necessary for the designing team to get a knack of what you have dreamt of and then on how to execute it to deliver the best job for your dream project.